How We Teach Microflora to Do Something New

But how do we get this microflora to make whey, a protein that historically could come only from a mammal’s milk? Obviously, there’s more to this story.

And the story starts with DNA.

Every living thing on earth speaks a common language, and that language is deoxyribonucleic acid, or DNA. You’ve undoubtedly seen depictions of DNA’s iconic double-helix shape.

DNA carries the genetic instructions for the development, function, growth, and reproduction of all known organisms. The rungs on the double helix are made up of chemical pairs. There are just four chemicals, called bases, that make up the pairs. These are cytosine, guanine, adenosine, and thymine — often shortened to simply C, G, A, and T. These chemicals bind to each other only in very specific combinations: C-G and G-C, A-T and T-A. The base pairs connect across the double helix, forming the inner rungs.

On the outside of the helix, the base pairs link with sugars and phosphates. Taken together, these molecules — base, sugar, and phosphate — are called nucleotides. Nucleotides stack up along the helix and are arranged in three-letter sets called codons, each a formula for making a single amino acid.

You may remember from high school biology that amino acids are the building blocks of proteins, and proteins serve all kinds of functions. Codons make individual amino acids; when you have a bunch of codons together, you have a gene, or a set of instructions that tell a cell how to build a protein — amino acid “block” by amino acid “block.”

The precise sequence of base pairs, that form the codons that comprise genes, which in turn instruct a cell to build proteins, is what we’re referring to when we use the term “genetic code.”

Put another way: if you think of DNA as a written language, it has just four letters (bases), arranged into three-letter words (codons), but the words can be combined in nearly infinite order to make instructional sentences (genes). (See figure below.) 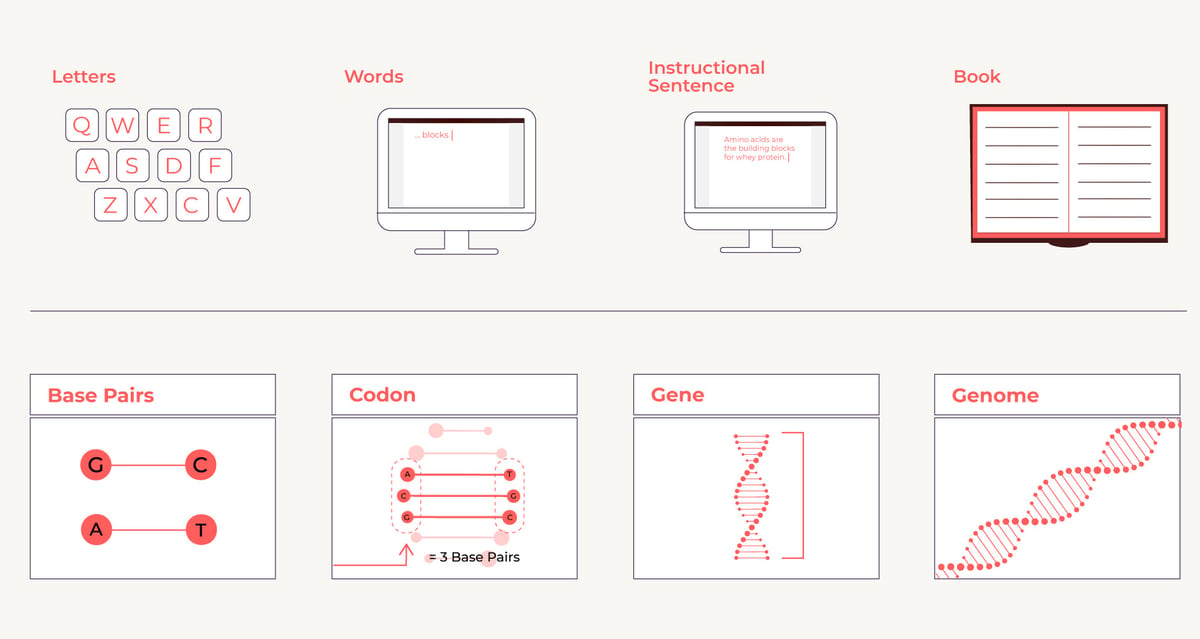 Translating the Story of Cow

We often get asked if we use DNA from a cow. The answer is no. We don’t. We don’t have to, because the scientists who worked on the Bovine Genome Project have already translated the Story of Cow for us.1

Genome sequencing is writing down an organism’s DNA story in a way that humans can read. It’s finding out what order the words (codons) and sentences (genes) appear in. The cow’s genome has already been sequenced, and that story is freely available to anyone with the know-how to read it.

The first cow to have her genome sequenced was named L1 Dominette 01449, and she lived in Montana.2 We don’t know how long Dominette lived, but we do know that she was eight years old in 2009 when her genome was published. Just as a doctor draws your blood to understand important information about your body, scientists took a blood sample from Dominette in order to decode and record her genomic story.3

The scientists decoded approximately 22,000 genes from Dominette’s blood. Twenty-two thousand! That’s a whole lot of genes to sort through to find the one that tells a cow’s cells to make whey protein in her milk.

But luckily, since every gene encodes one protein, we don’t actually need to flip through the entire Story of Cow to find it. We know what protein we want to make, so we can look at the protein and work backward. The sequence of amino acids in the protein tells us the order in which we need to assemble the C, G, A, and T chemicals to make the gene. The gene’s assembly can take place entirely in a research laboratory and doesn’t require any interactions with a cow at all.

We can find whatever protein sequence information we need in freely available open-source databases. One such database is UniProt (short for universal protein resource). You can look at the UniProt entry for beta-lactoglobulin, the name of the whey protein Perfect Day makes, here. While the entry looks like gibberish to the average person, to a molecular biologist, that information spells out exactly how to build the gene from scratch — including how it folds into a three-dimensional shape. It’s pretty cool!

DNA is the universal language of life, so organisms recognize DNA no matter its origin. Every living thing speaks this molecular language. At Perfect Day, we start with the information from UniProt. Next, you could say we “copy” the genetic information about whey protein and “paste” it into the microflora's genome. In a sense, we’ve written a whey-making quick guide and handed it to the microflora. The microflora understands the instructions and incorporates the DNA into its own genome.

But why would the microflora take the new information into its genome?

In the wild, microflora must repair breaks in their DNA constantly, and will sometimes accidentally incorporate foreign DNA from their environment. By studying the conditions under which this occurs, we can facilitate the conditions to make a particular genetic trade happen on purpose.

In a solution, we mix the new made-from-scratch whey genes with hundreds of millions of microflora cells. Out of those millions, a few of the microflora will mistake the whey-making gene as their own and will file the new gene into their own genetic books.

One way the microflora can adopt the new information is by looking for codons that fit into breaks in its own DNA. Imagine that on either side of the newly-made whey gene there’s a codon that reads, “connect.” The flora searches the broken segments in its own DNA, and when it finds a gap with ends that match the connector’s ends, the flora fills the gap with that connector. We call this homologous recombination. This process has to take place only once and then the new gene is permanently incorporated into that flora’s genome. 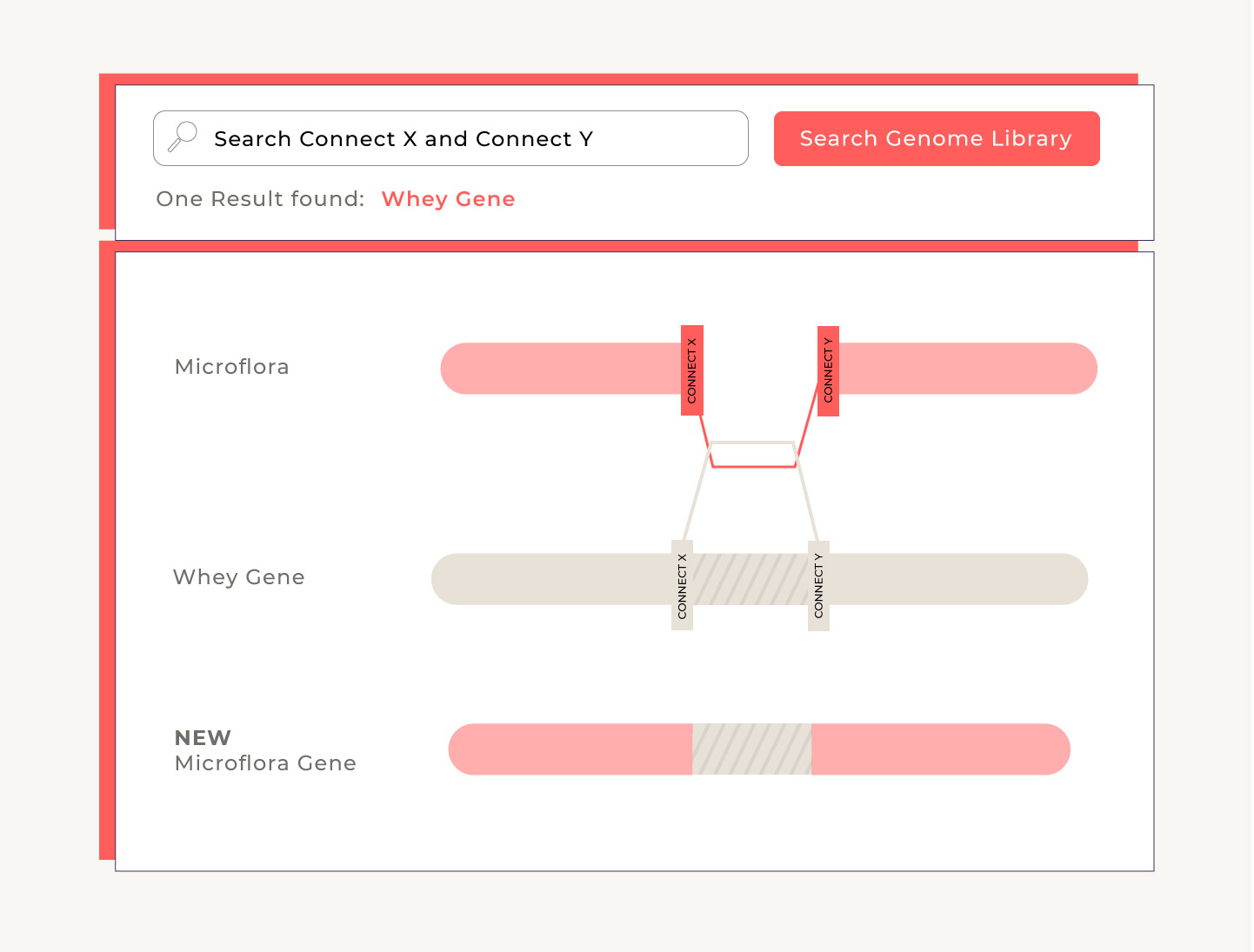 Once we’ve identified the microflora cells that have successfully repaired their DNA with the new whey-making gene, we isolate them and encourage them to grow and reproduce. Now that the microflora understands how to make whey, it passes on that information every time it reproduces. So when it undergoes fermentation, it has the instructions it needs to convert sugar into whey.

Putting It in Perspective

To recap: all living things understand the universal language of DNA, regardless of what species it comes from. Genes are instructional “sentences” that tell an organism’s cells how to produce proteins. As long as we have the “book” — the genome — for an organism, we can identify genes that encode proteins of interest. That genetic information can be read and shared with other organisms such as microflora. And we can guide this process to get the DNA changes we want.

This science is used across industries to make not only food, but also medicines, beauty products, and even fashion in ways that are more sustainable. For example, insulin, a life-saving drug used for treating diabetes, used to be harvested from pigs and cattle. In 1978, strain engineers introduced the insulin-making gene from humans into a bacterium called Escherichia coli, better known as E. coli.4 Today, it’s standard practice to make all insulin using human DNA and E. coli in an animal-free process, because it’s less expensive, uses fewer resources, is cleaner and safer, and is less prone to causing allergic reaction in human patients. 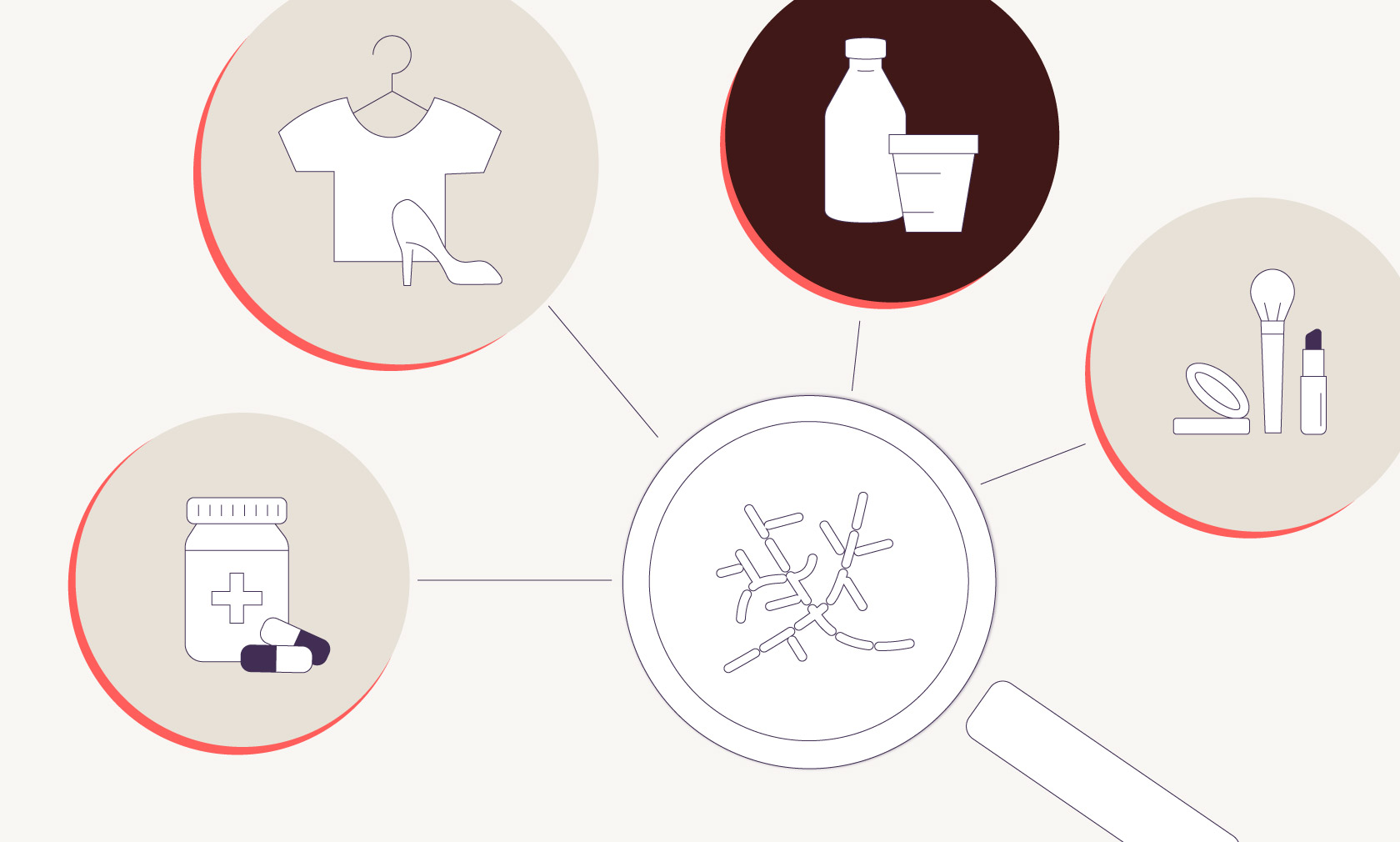 In the beauty industry, companies like Geltor use strain engineering to teach microflora to make animal-free collagen proteins for skincare products. (Collagen is otherwise sourced from animal skin, bones, and connective tissue.) In fashion, companies like Bolt Threads are teaching microflora to make new materials, such as spider-free spider silk that can be woven into fabric, and leather made from fungi instead of cowhide.

We’re on the precipice of a new cellular revolution that will have lasting impacts across industries. Microflora have incredible potential to make familiar products in sustainable, animal-free ways. That’s why, when it comes to our animal-free dairy protein, we say we’re changing the process, not the food.

We know that, through evolution, Mother Nature is the ultimate engineer. But with modern tools of biology, we’re helping to accelerate her processes for a more sustainable, humane world.