Think about your favorite dairy foods. Really try to imagine preparing and eating them: experience in your mind that melt-in-your-mouth ice cream on a hot summer day. Your barista pouring a cold, frothy foam over your latte. What about the way a silky-smooth yogurt coats the roof of your mouth? And what’s a bagel without a velvety schmear of cream cheese?

Milk can be transformed into many wonderful things. But do you ever stop to think about why dairy foods are so wonderful — why you like them in the first place?

When posed with this question, you’re likely to answer, “Because dairy tastes good. It’s the flavor!” But flavor is only one part of the total taste experience. Often when people refer to taste they really mean taste plus texture — or more accurately, the overall sensory experience we have when flavor and texture play together.

Why Is Texture Important to Our Tastebuds?

Like flavor, how a food feels in your mouth is important to how appealing a food is. There’s even a word for this: mouthfeel refers to the textural sensations you experience inside your mouth when you eat a food or drink a beverage.

Texture can make or break our experience of a food. Try imagining an ice cream that tastes good but is more chalky than creamy, a yogurt that’s sweet but gummy, or a flavorful cheese that’s more gluey than melty, and crumbles when it should stretch. None of those sound appealing, do they?

If you think of mouthfeel as a performance, then protein and fat are the dynamic duo — two players working together, bouncing their talents off one another. Fat is the virtuoso of flavor, while protein is the master of texture. The supporting cast includes sugars, salts, and other actors whose roles enrich the overall taste and feel.

The Star of Texture

I asked Ty Wagoner, one of Perfect Day’s food scientists, whether milk protein is the secret reason we love dairy. Animal-free whey protein is, after all, the flagship ingredient Perfect Day has commercialized for use by partners.

“It’s a large part of the reason we love dairy,” he says. What we know and love as dairy is “99% protein and fat, and honestly, more of it is attributable to protein than fat. If we’re trying to recreate dairy products (from scratch), the protein gets us 80% of the way there. Nothing gives us the impact quite like the proteins do.”

He describes fat as a secondary component of dairy, playing a larger role in creating that characteristically creamy mouthfeel, and delivering fat-soluble flavor compounds. But milk protein itself doesn’t contribute much to flavor — it doesn’t really taste like anything at all.

So what does milk protein contribute? Dairy’s secret superpower lies in milk protein’s ability to form stable, networked structures at the molecular level that impact how other components (fat, water, air, sugars) interact with one another. This is what we mean when we refer to milk protein’s functionality.

Emulsification is when two liquids that don’t naturally mix are forced together in a stable suspension. You’ve probably noticed that if you try to mix oil and water, they tend to stay separate, with the less-dense oil pooling on the water’s surface. An emulsifier is an agent that forces two repellant liquids to mix without separating, and dairy protein excels at this.

Homogenized cow’s milk is an emulsion of water, milk fat, milk proteins, lactose (milk sugar), and other minerals. The proteins in milk naturally act as an emulsifier between water and fat, working to keep them evenly suspended throughout the solution. At the molecular level, this works because milk protein has a hydrophilic (water-loving) and a hydrophobic (water-hating) part.1 The hydrophilic part orients toward the water, and the hydrophobic part toward the fat, keeping the two comfortably separate and distributed throughout the solution. (Fun fact: the word emulsify comes from the Latin word for milk!2)

Without the milk protein, you could still mix fat and water, but they’d rapidly separate from one another and you’d probably describe the mouthfeel as greasy. But milk protein disperses tiny fat droplets evenly throughout the water, contributing what we perceive as creamy, the gold standard descriptor for dairy products.

A gel is a stable matrix that holds liquid in a solid or semi-solid formation. Under the right conditions, dairy proteins interact with one another to trap water. For example, in a product like yogurt, with low fat and high water concentrations, Ty says that “the protein network is a sponge, and it can hold a lot of water.”

If you look closely at a kitchen sponge, you’ll see it has “walls” with lots of surface area and many pockets for grabbing and holding water. Milk proteins form a similar three-dimensional structure at the molecular level. Milk protein is so functional that it can actually trap more than its mass in water. You want exactly this kind of water binding in a yogurt.

Foams are formed when water and air combine into a structure. That structure, too, is formed by protein. In a foam, the protein meets the air and water molecules at their interface. The hydrophilic parts of the protein orient toward the water molecules, and the hydrophobic portions toward the air cells. The milk protein creates a protective coating around the air bubbles that holds them in place and keeps them from bursting.3

Foaming is important when we need to incorporate air bubbles into a food or drink’s texture. Think of the silky foam your barista uses to add a final flourish to your latte — all thanks to milk protein’s ability to hold air bubbles. In fact, fat is often a problem for foams. It’s easier to whip skim milk into a long-lasting froth than whole milk, because skim milk is proportionally higher in protein than fat, whereas the fat lipids in whole milk destabilize the foam.

Ice cream is a scrumptious example that showcases milk protein’s functionality in all of these roles. One: milk proteins stabilize the distribution of air bubbles, ensuring a creamy, spoonable texture. (Although we don’t think of ice cream as a foam, it does incorporate a generous amount of air, or overrun, and without it, ice cream would be more like an ice block.) Two: milk proteins emulsify fat. And three: they bind water. 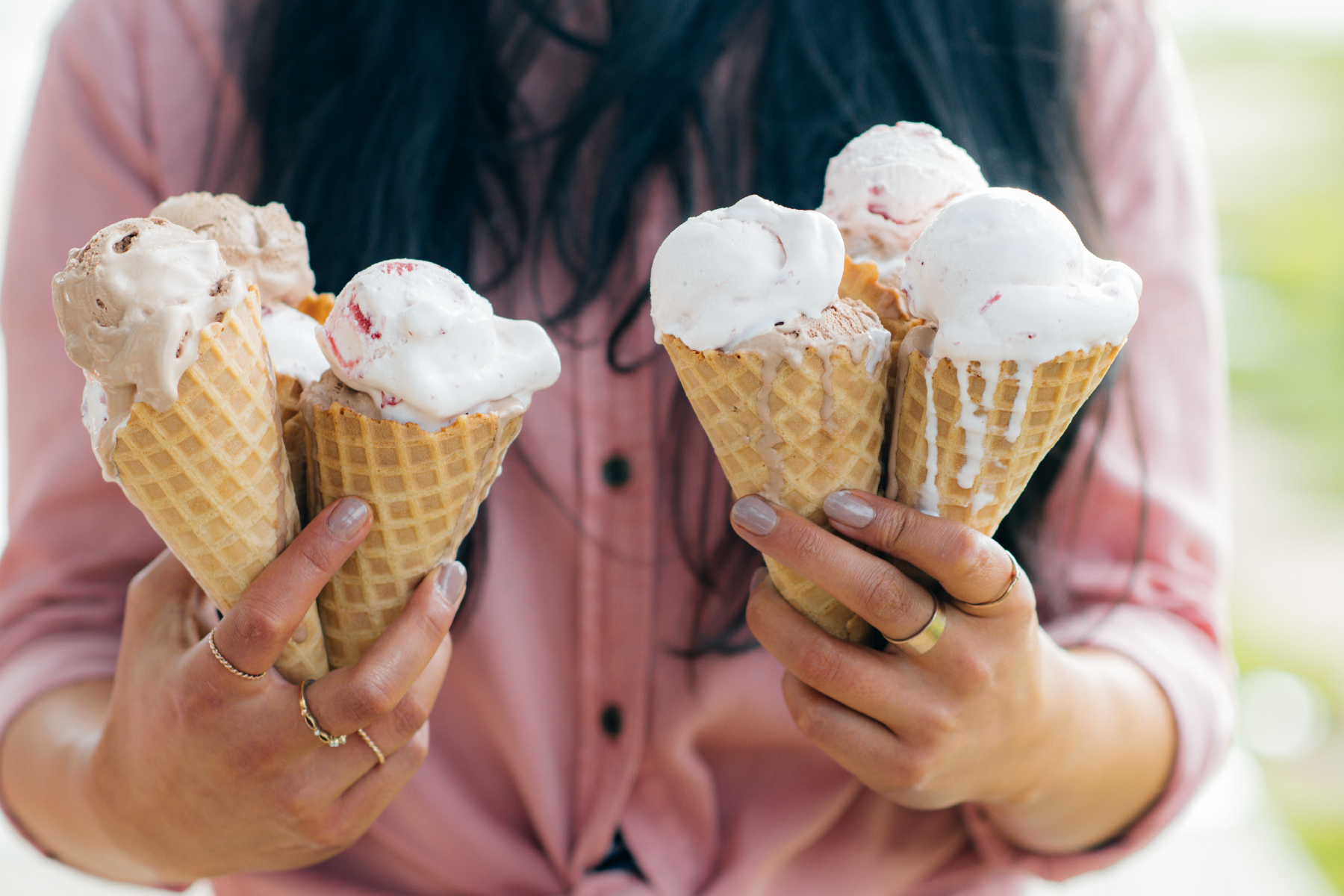 This threefold interaction of milk protein with air, fat, and water is where the magic happens. We can detect it by observing a frozen product’s melt rate. When ice cream starts to melt, some of the water is bound up with the protein, meaning it doesn’t melt as readily. The air cells, situated within the fat and protein structure, also act to insulate the product and further slow the melt rate. But most importantly of all, the fat globules that are emulsified within the ice cream remain small and distributed. The smaller the fat globules, the greater the surface area of fat melting on your tongue, and the creamier the mouthfeel we perceive. That’s the wonderful moment of flavor release that separates mediocre frozen desserts from fantastic frozen desserts.

This range of superpowers is a clue as to why Perfect Day’s first commercial partnerships are in ice cream — to show off the heroic versatility of our animal-free dairy protein within a single product.

Okay… But Why Not Plant Protein?

The protein is arguably the component of whole cow’s milk that is most valuable in food science, precisely because of its unparalleled functionality. That’s why, instead of starting with milk, we make this critical emulsifying, gelling, and foaming protein from scratch, using a completely animal-free fermentation process. This highly functional, pure protein powder can then be combined with plant-derived fats and sugars in varying proportions to achieve the familiar textures you love about your favorite dairy foods.

So why not just use plant proteins? Put simply, plant proteins evolved over time to do specific things — for plants. Proteins are all around us in the natural world, involved in maintaining the biological systems of all living organisms, but they don’t all have the same functions.

In cell biology, proteins are highly varied. Some are responsible for tightly binding and transporting molecules important to cell functions. Others build and repair muscle, connective, and other tissues in mammals, or structural tissues in plants. Still others perform enzymatic functions that catalyze chemical reactions. In sum, proteins are incredibly varied in terms of their molecular shapes and behaviors. And while plant proteins are useful for some things, they’re not quite as useful for recreating the dairy foods we love, because — well, they’re not milk proteins. 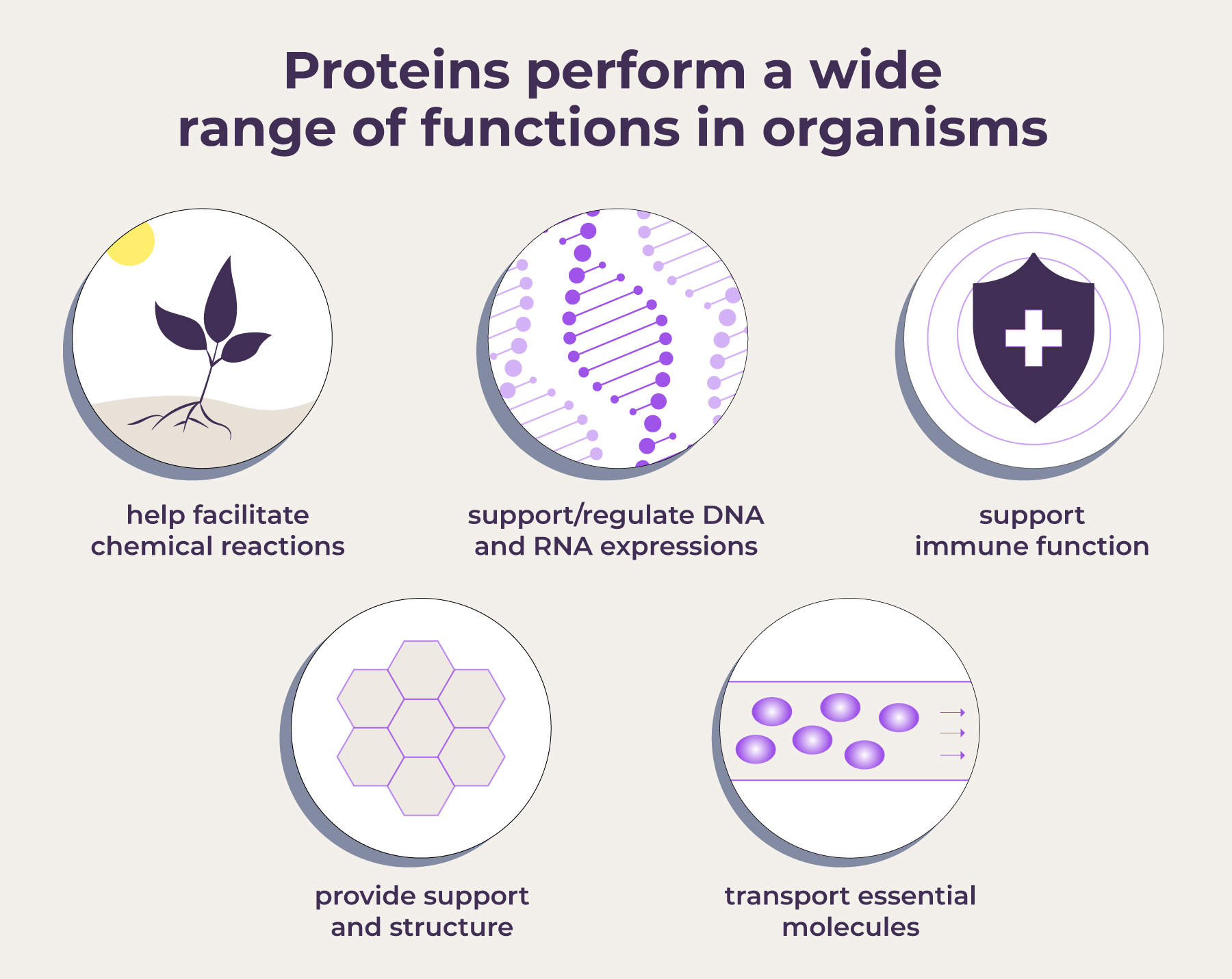 While some plant proteins can approximate the basic functions of dairy proteins, the extraction process of separating proteins from vegetal sources can yield funky flavors. For example, pea protein often tastes like peas, and oat protein like oats. While this isn’t always a bad thing, it’s also not always what we want. Off-notes can be expensive to remove or difficult to mask. In comparison, dairy protein is neutral in taste, allowing more flavorful fats, sugars, and other components to shine.

Even the best plant-based protein options still don’t match milk protein’s power to emulsify, gel, and foam. This is why you experience plant-based ice creams as icy or chalky, rather than creamy. Cheese alternatives, typically made from plant starches and gums, miss the elasticity you expect from mozzarella. It’s why plant-based milks sometimes separate or clump in hot coffee, instead of making rich, cloud-like foams. And finally, it’s why plant-based cheese spreads and yogurts are gummy or watery compared to their protein-rich milk-derived counterparts.

Dairy proteins have evolved to be not only nutritious and easily digestible, but also to be incredibly useful in food science. They’re so functional, in fact, that it’s hard to find a single class of plant proteins that have all the same properties. This is not to say that plant-derived proteins are bad — but they’re certainly not the same. That total package of functionality and textural qualities gives milk protein an edge.

Perfect Day’s Research and Commercialization Chef, Sascha Weiss — a longtime veteran of the plant-based culinary scene — is astounded at what animal-free dairy protein can do. “Working with Perfect Day protein is really amazing,” he says. “I’ve never had the opportunity to work with a non-animal-based protein that’s as functional as Perfect Day’s.”

On the dairy side, the Graeter family has been in the ice cream business for 150 years. In their entire history, Graeter’s never once offered an animal-free version of their ice cream — until they discovered the powerful functionality of Perfect Day’s cow-free milk protein. Speaking to Cincinnati Public Radio, Rich Graeter challenged listeners to a taste test. “I would bet that if I scooped up a bowl of our Perfect Indulgence dessert, and didn’t say anything else to you, there’s a good chance you would have no idea it wasn’t [our traditional dairy ice cream].”4

And why did a 150-year-old dairy company decide to give animal-free ice cream a go? In addition to being every bit as indulgent as the ice cream Graeter’s has offered for more than a century, Rich says “it’s a more humane, ethical, sustainable, green way to create dairy proteins” — attributes consumers increasingly care about.

Experienced food makers know: the power of milk protein speaks for itself. Give it a try. You’ll see what we mean.